An unconventional sharing of holiday cheer.

Every December, we like to send our clients and vendors a little something special for the holidays.

The last couple of years, we flaunted custom chocolates, complete with impeccable box designs, so for 2014, we decided to switch things up and go all out. “All out” meaning an out-of-this-world digital experience done in a way we’d never attempted before, and something we were unsure could be pulled off in just a few weeks. After several rounds of ideation, we emerged with the Holiday Odditree, an interactive website that allowed users to create their own unique work of art and share it with everyone. 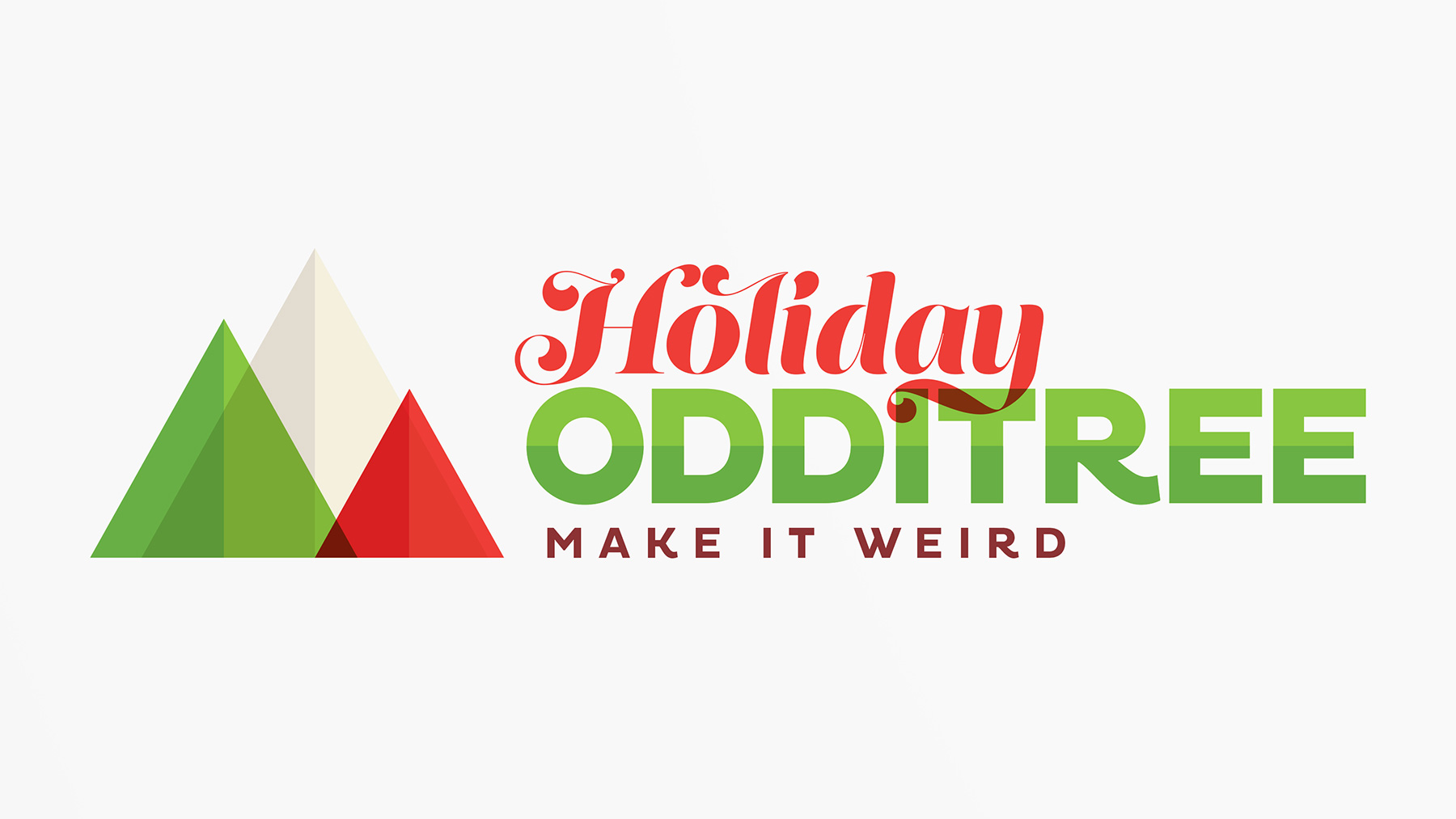 It was important to us to push the bounds of what could be considered a tree decoration and to offer users a vast selection of ornaments to express creative freedom. A comprehensive list of traditional and nontraditional ideas was drawn up, each ornament a piece of a puzzle, or a tool, that allowed users to feel a sense of ownership over what they created.

The design aspect of the Odditree was an all-hands-on-deck situation. At any point, one to five designers were working in unison to create a consistent style. With so many unique designer styles, this challenge of synchronicity was a welcome opportunity that warranted itself to internal team building.

Each step of the way, the design team worked with developers in learning a new technology, discovering what was and wasn’t possible in our closing timeframe.

After a couple of weeks of constant sketching and designing, the ornaments and backgrounds were born. Bizarre and beautiful, nearly 200 in all — every one held the potential to unlock users’ imagination. 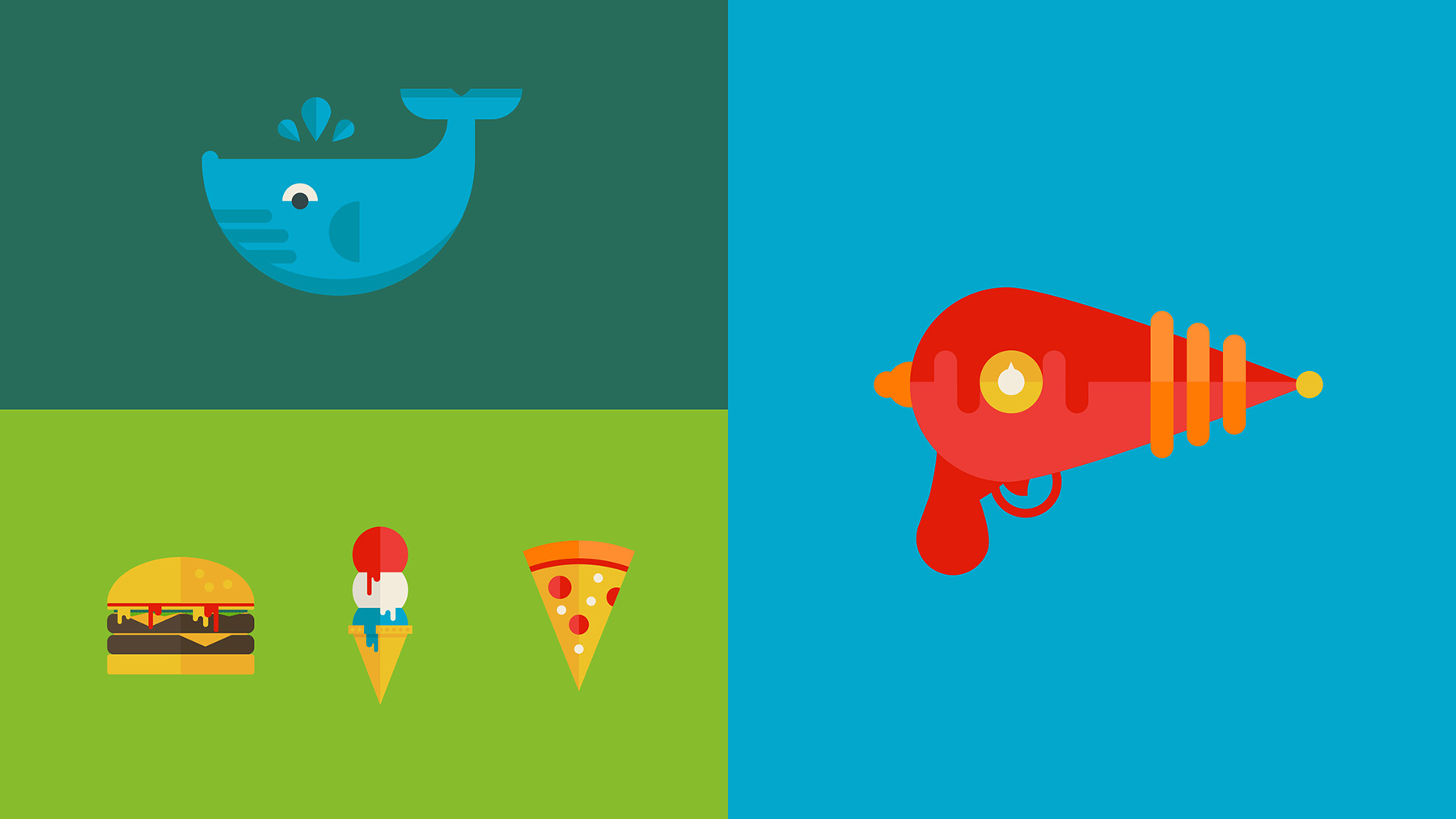 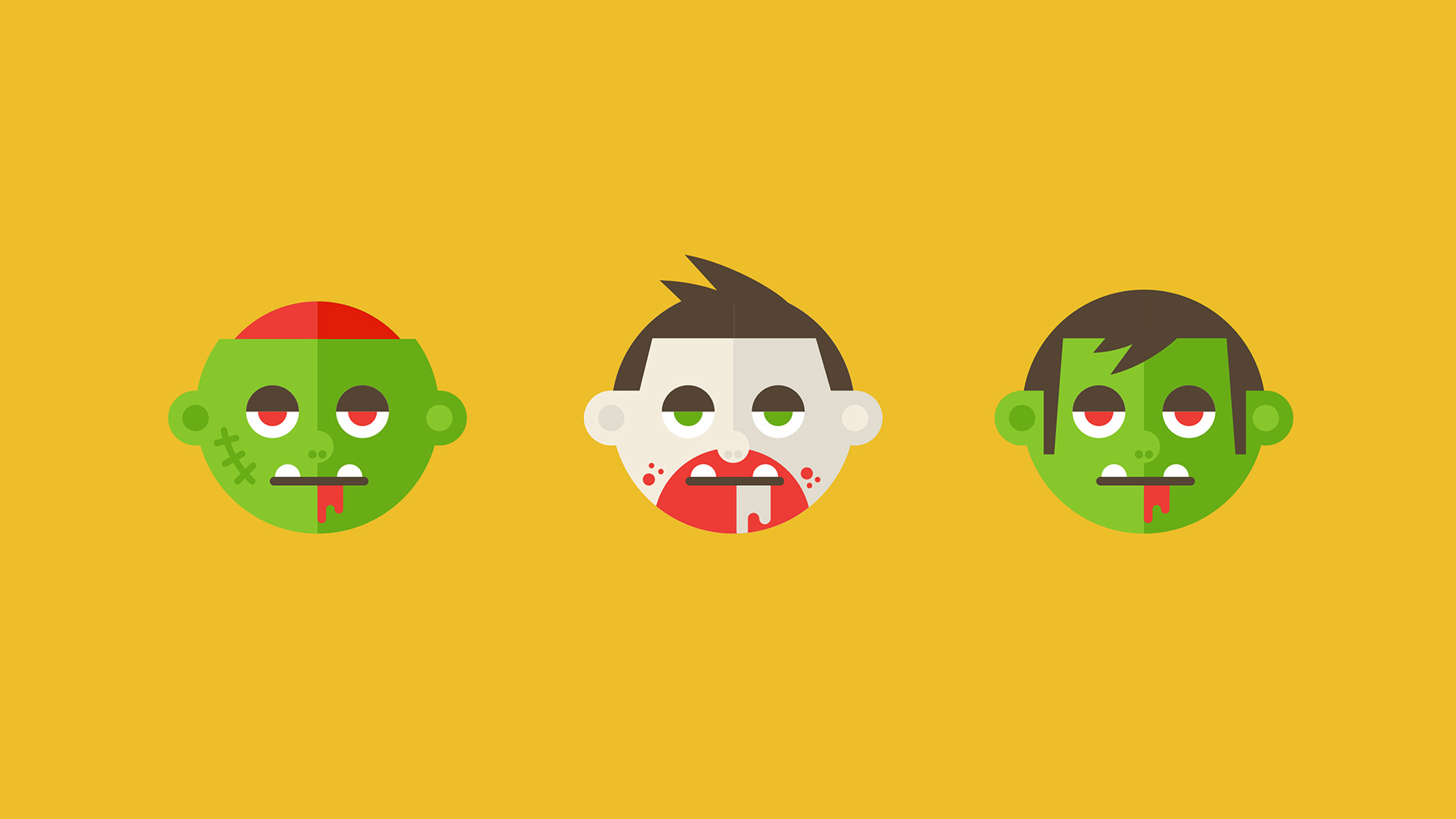 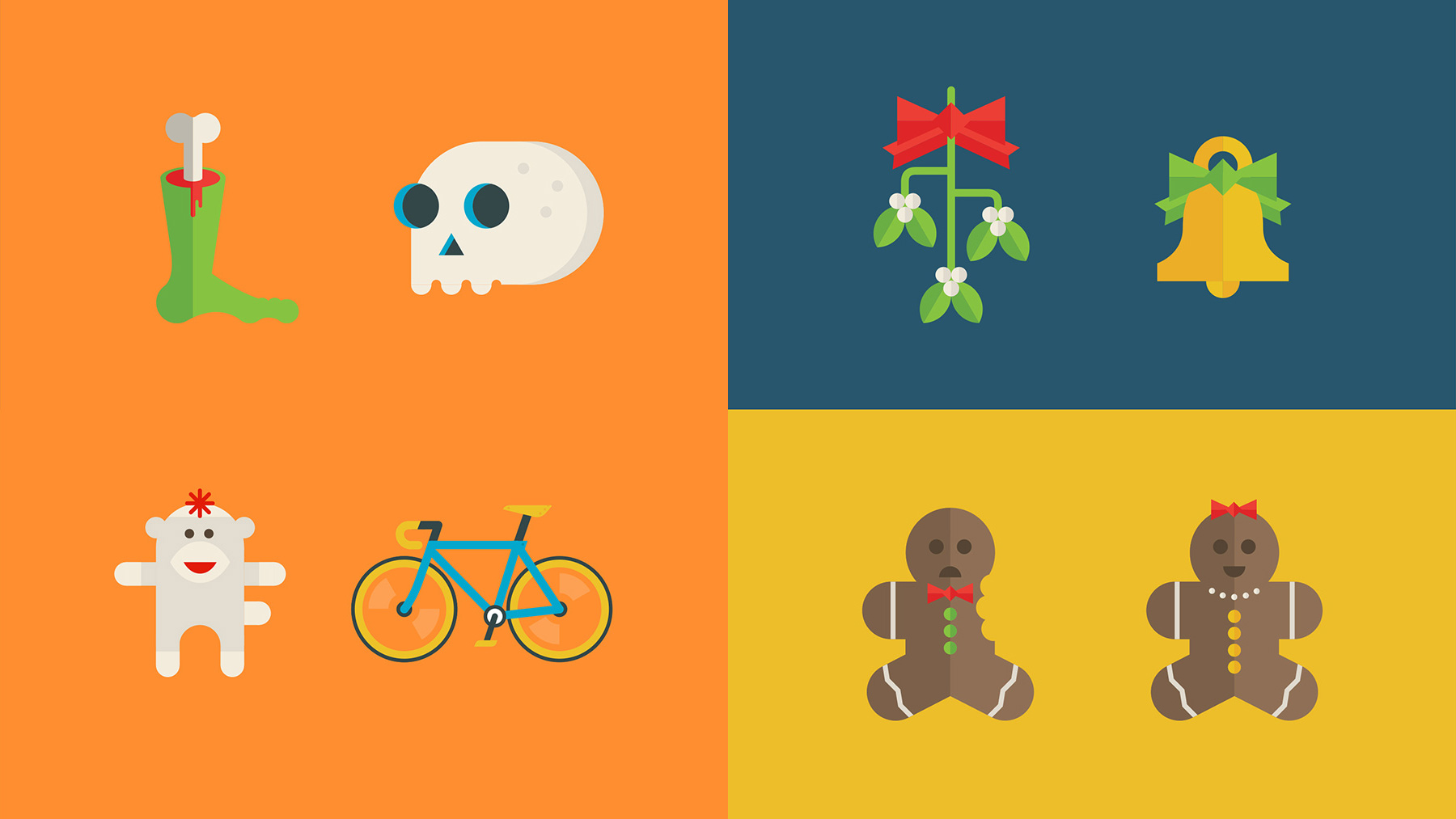 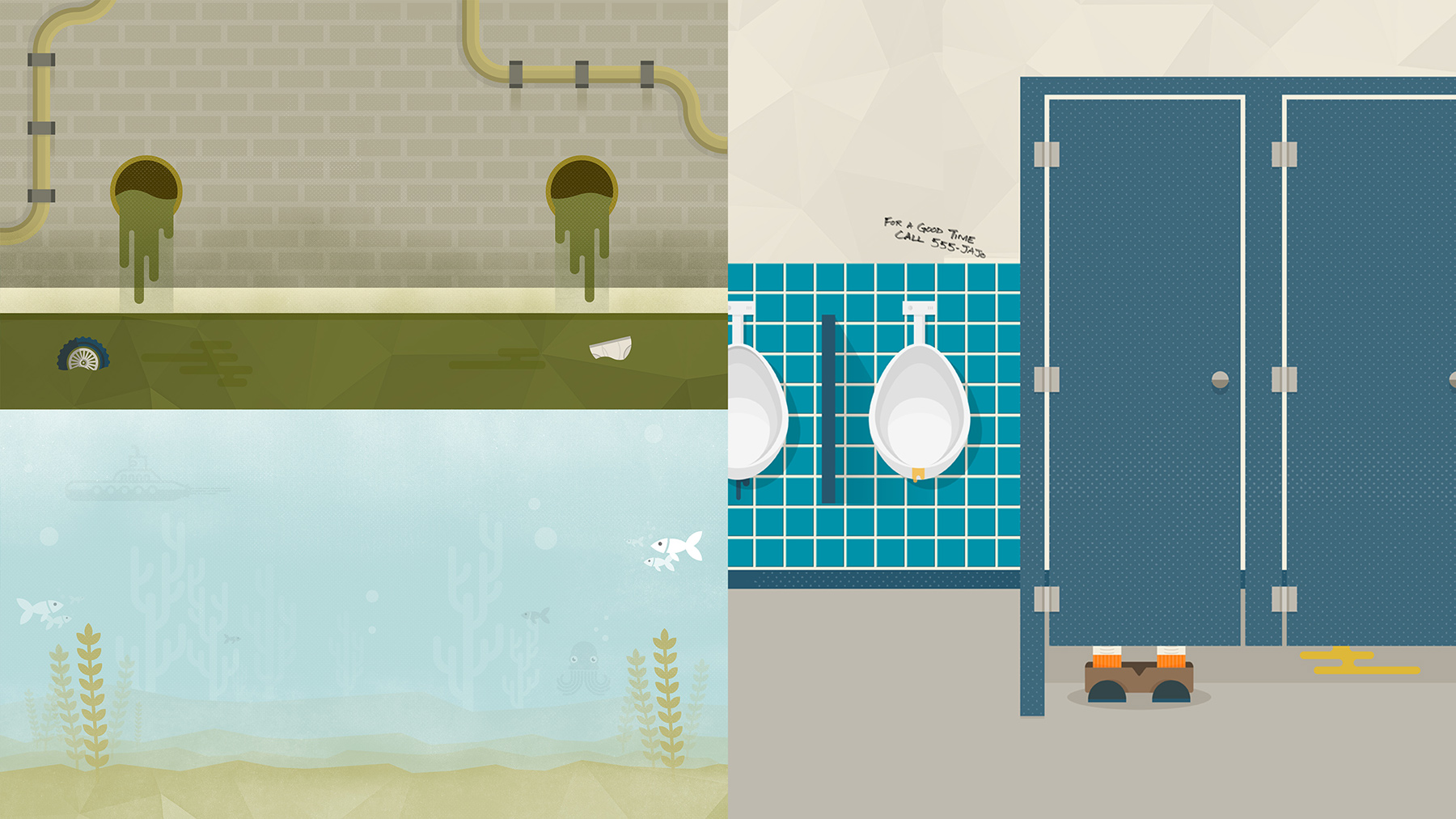 While the designers were hard at work on ornaments and backdrops, the developers kicked off the coding and web development phase.

Once the menu system was established, the developers began research on the canvas element. Fabric.js provided an object oriented framework, and more than 600 JavaScript functions brought the system to life.

In less than a month, the team learned a new canvas framework, built a system to capture the artwork, and had an impressive collection of ornaments to place. It was ambitious given the time frame, but everyone was happy with the site after a few rounds of internal testing.

A walkthrough was created, the interface simple enough for any age range. Users could drag and drop each element, rotate it, scale it, etc. They had full control over their masterpiece. Once finishing touches were applied, the final step was sharing the weirdness with the world. And they got weird. 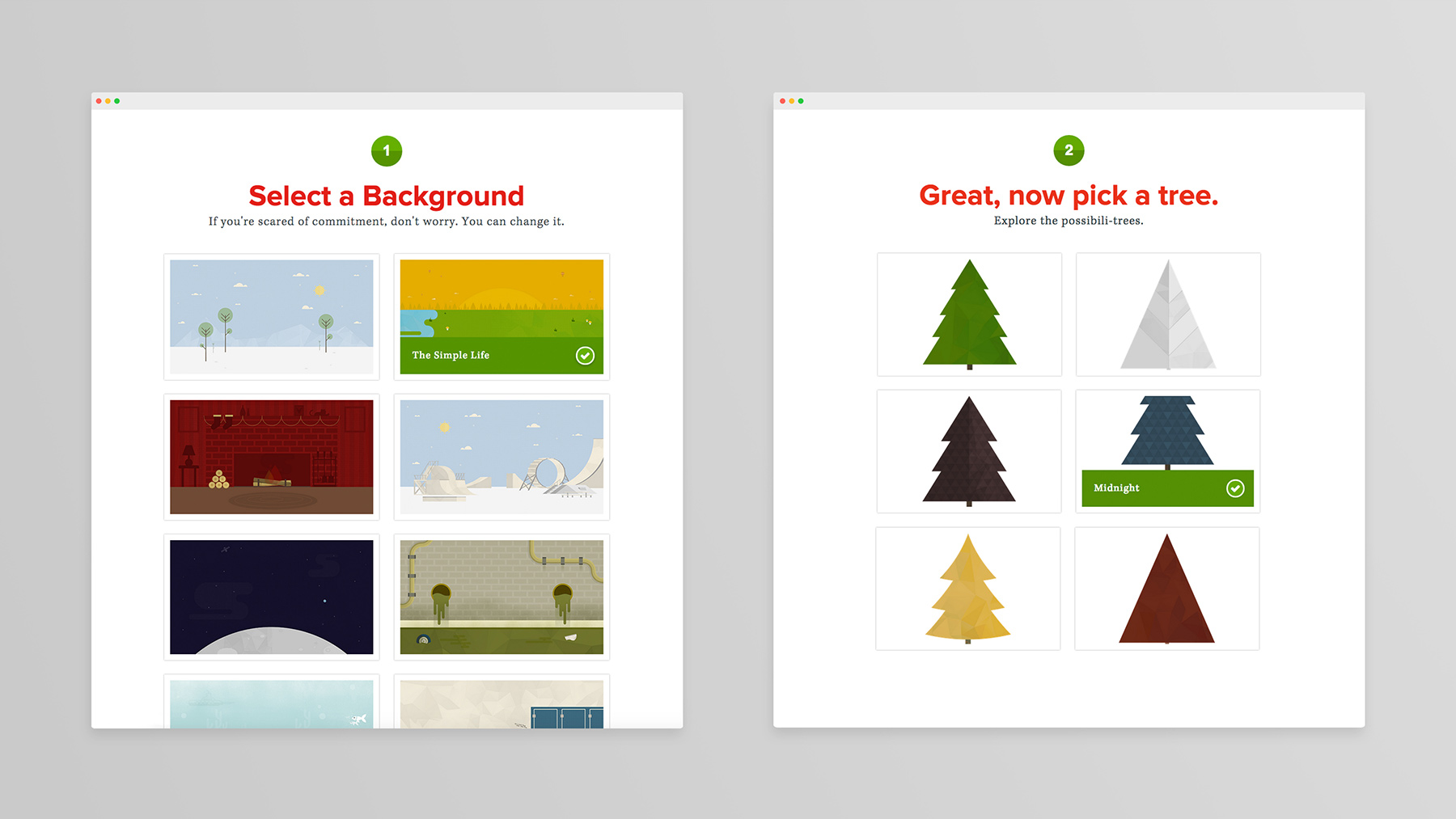 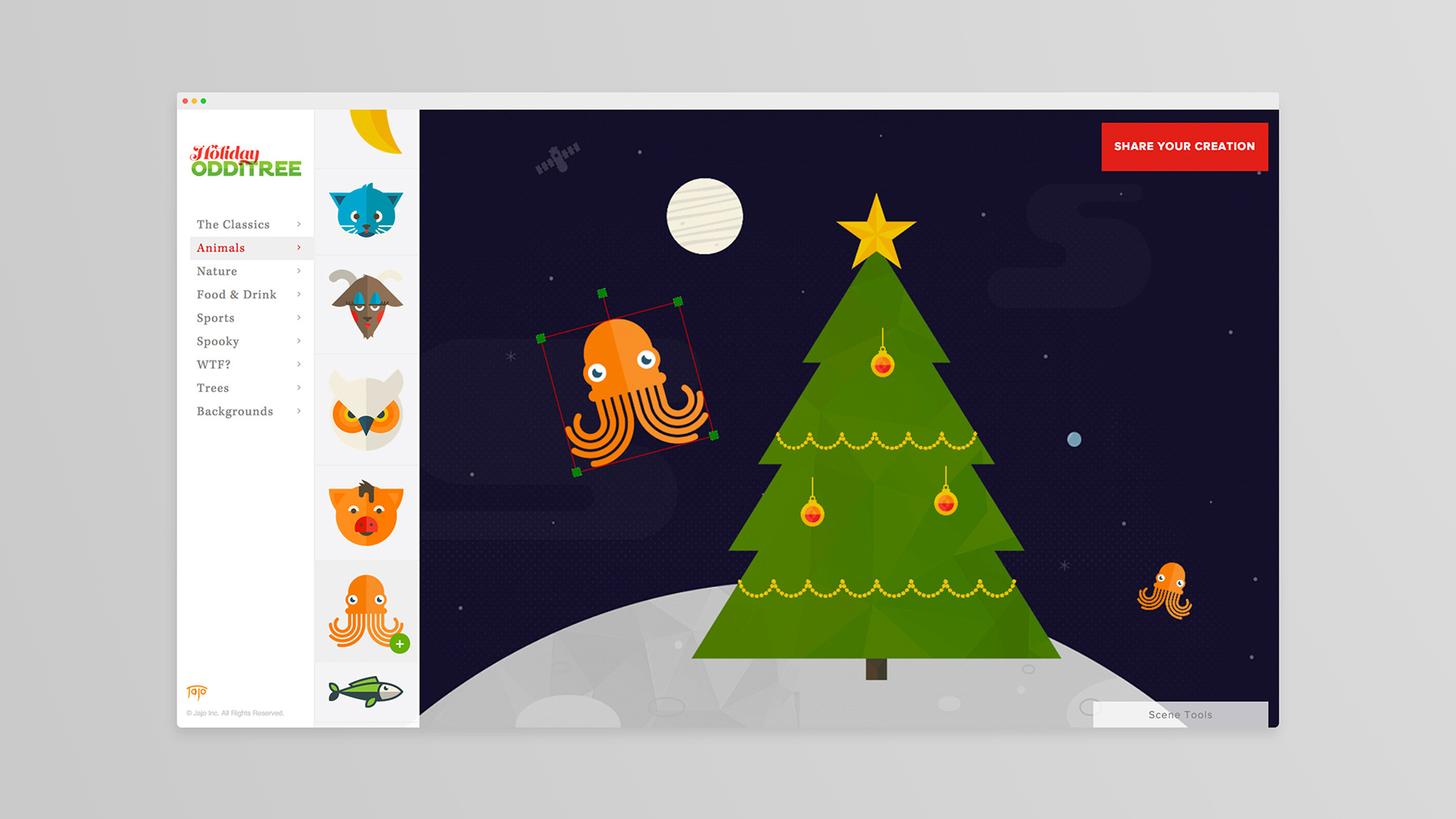 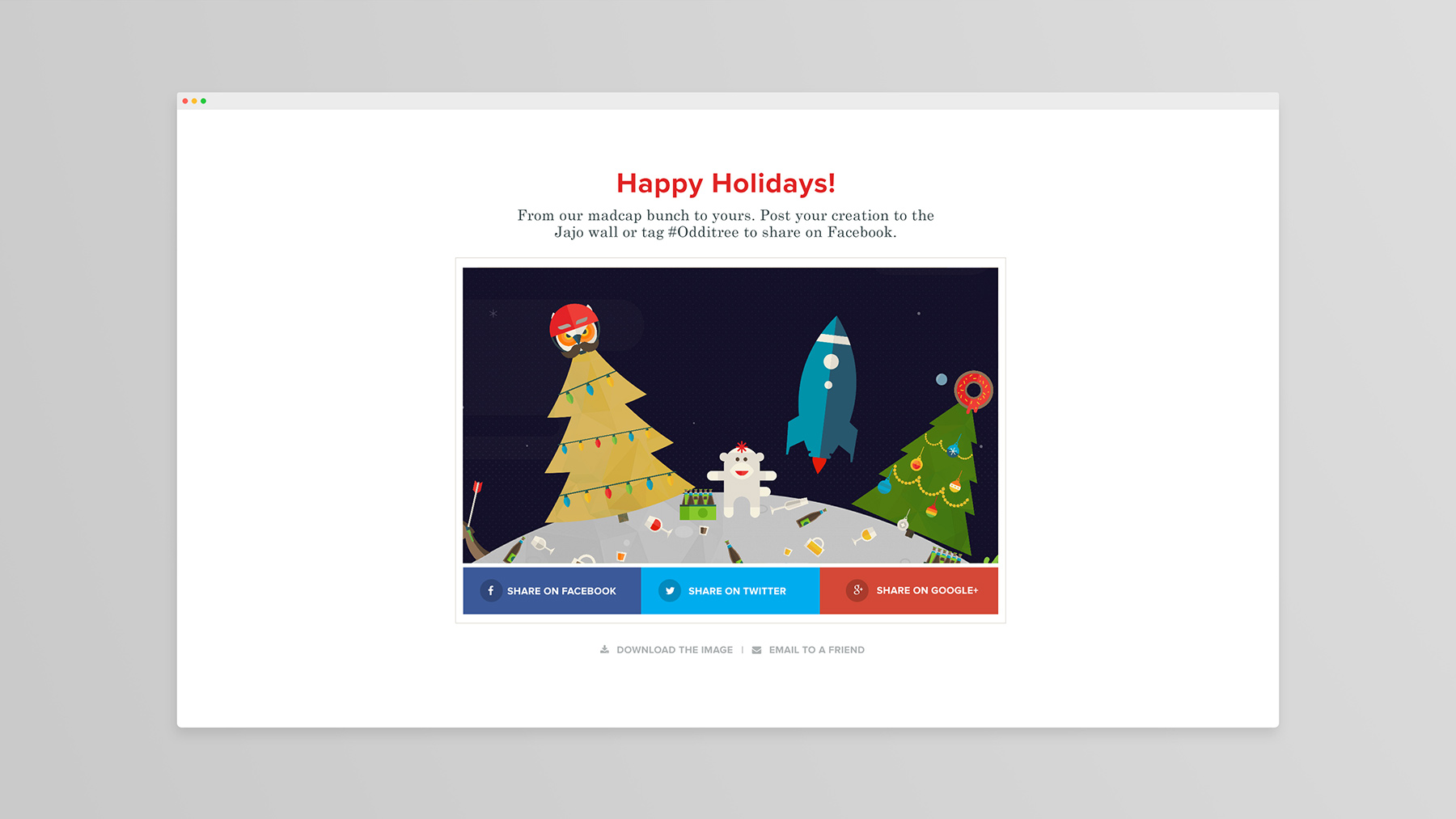 Obviously, the Odditree began as a fun, interactive holiday game for our clients, but the website was a thing of bizarre beauty, doused in Jajomie blood, sweat and tears. It had legs and it wanted to run, so we let it.

Clients received the website by way of fancy, chocolate-dipped fortune cookies that linked back to the Odditree on each fortune. Extra cookies made their way to the community by way of local coffee shops and restaurants that graciously gave them out to further our odd cause. Everyone else heard via social media shares.

The decision to take the website to the general public was a natural one. We set up hashtags and a social media contest for best tree shared, hoping the interactive holiday site in all its peculiarity might have some viral pull. 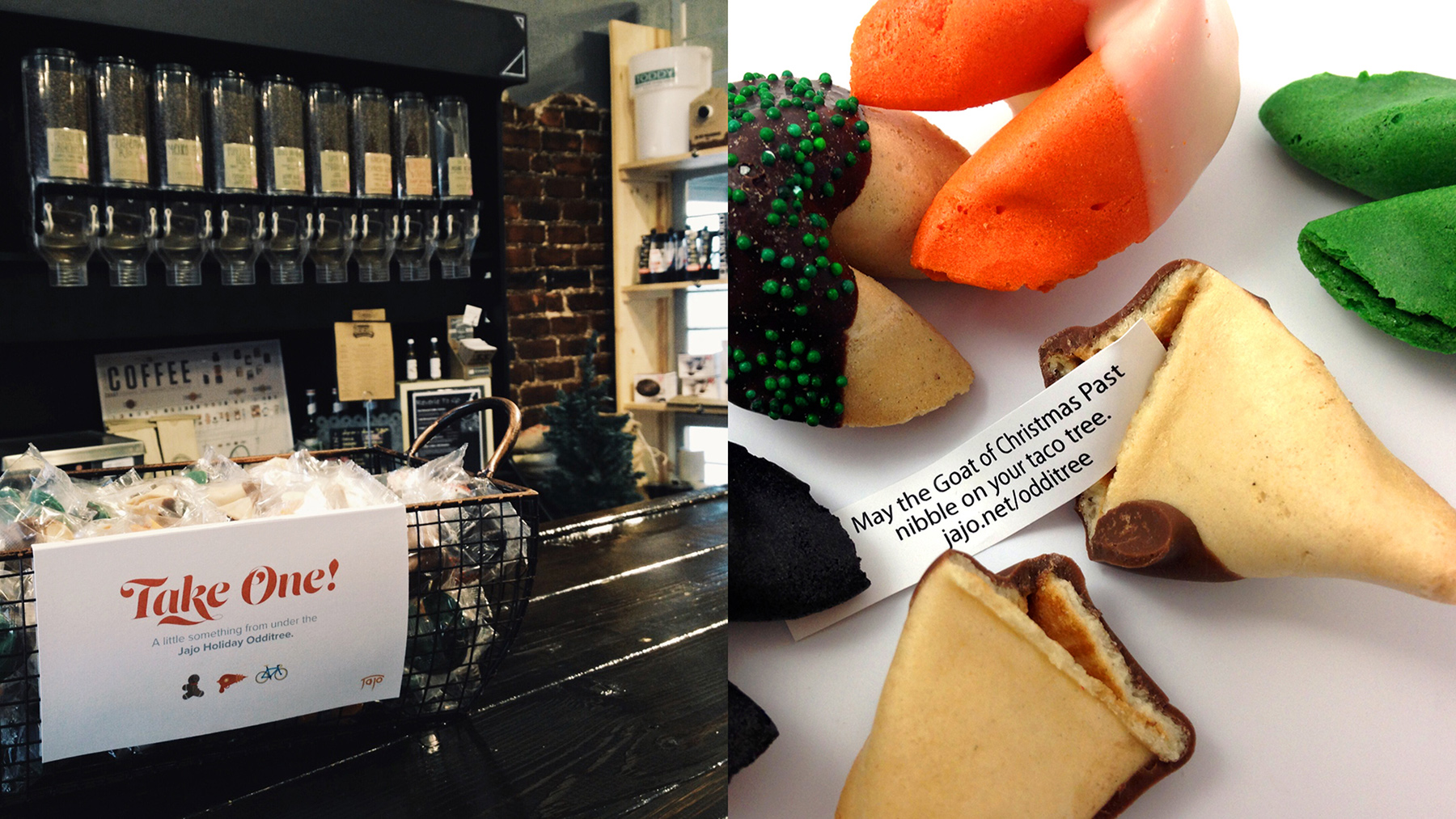 Like all things digital, as the trees were shared, the site’s popularity snowballed and Jajo’s website views spiked by over 1300%. Our team cried tears of joy and drank champagne as the world went on an Odditree-sharing frenzy, making the site, by far, the most popular thing we’ve ever done on the web.

By the end of the contest, countless trees were submitted, one even included a backstory about the “Land of Golden Sky, [where] only the owls live beneath the glorious rays of the three suns.” This was an unforeseen layer of participation. 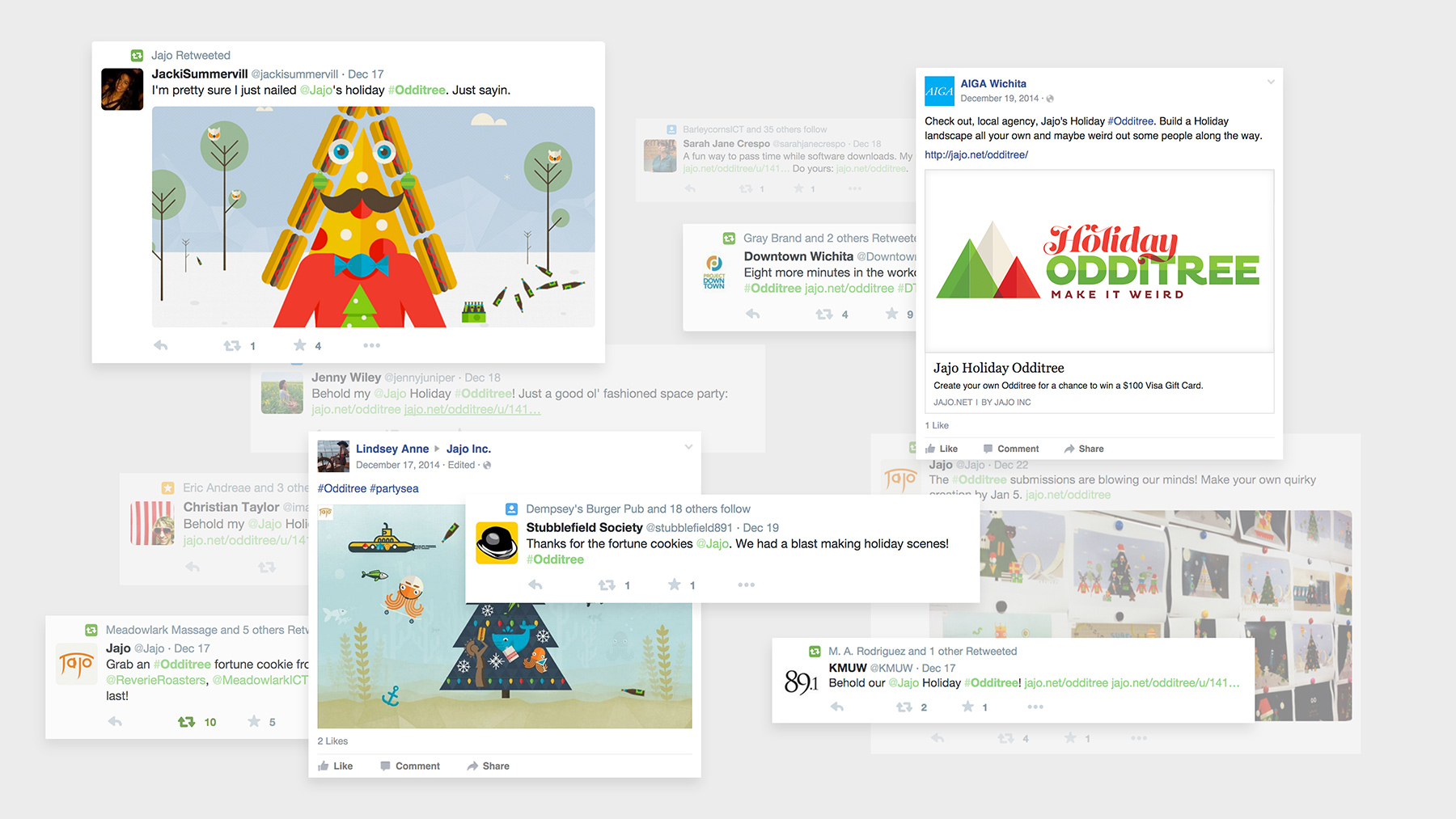 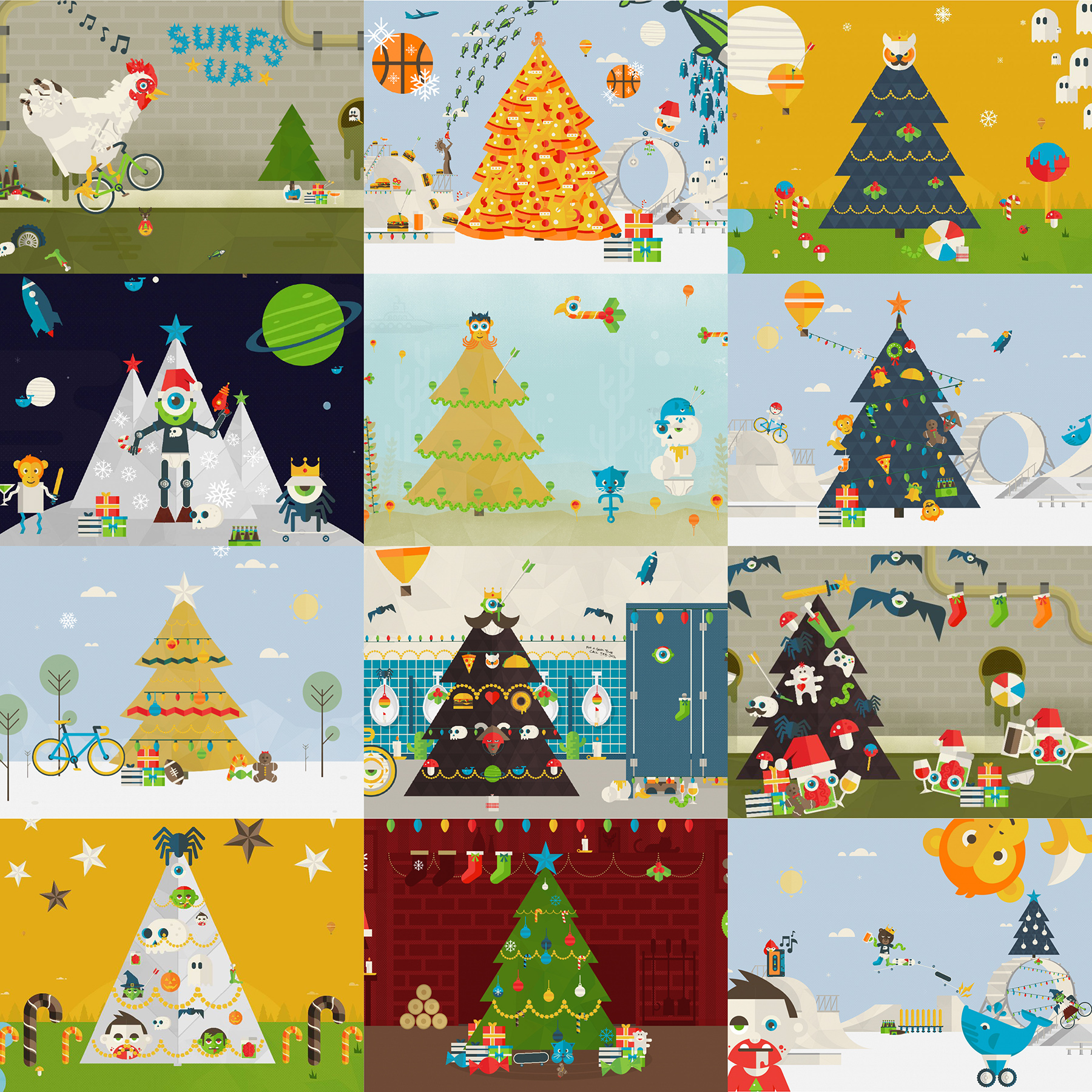 Competition was fierce, but with the most Jajomie votes and a delicious looking pizza tree, local floral shop owner, Matthew Dover won.