Fell in Love with a Brand Cult status. It’s the kind of brand love every musical group and marketing business strives for. Take garage duo The White Stripes, for instance. You may have heard this candy-cane dream team made up of Jack and Meg White. They set themselves apart in a way most bands don’t. They rejected modern technology for years, created their own genre of delta blues-inspired garage and latched onto a color palette of red, white and black.

As a preteen, I was infatuated with them. In fact, that’s an understatement – I was a proud Candy Cane Child (the band’s equivalent of a Deadhead). I primarily wore red and white, adorned my home with peppermint trinkets galore and took up drumming with the aspiration of becoming the next Meg.

Now that I’m older, I find them extremely captivating from a marketer’s perspective. Just like a brand must prove itself bold and unique (think Apple and Starbucks), truly adored musicians must do the same.

Fostering brand love was crucial to Jack White’s success, and there is a lot your brand can learn from his 20-year stint of gimmickry.

True originality is rare, and audiences recognize that. Take ownership of aspects of your brand that no one else can claim.

The White Stripes created their own sound — a hybrid of delta blues and ‘60s garage. Their youthful color palette and decision not to include a bassist made them a fascinating musical specimen. There was nothing like it at the time.

The quality of the product you’re selling better live up to its marketing. People will quickly discover if your brand is all propaganda. Sure, The White Stripes have cheeky merch and themes, but they deliver on their promise of pure, transcendent music.

You can’t ignore the beauty in creating something great from so little. The White Stripes had an inexperienced drummer, no bassist, a crap ’60s plastic guitar that never stayed in tune, and a driven visionary. That last part is key.

You can sell gimmicks all day, but your products better meet or exceed expectations. Jack White’s prodigious songwriting abilities deliver. So does the kitsch of the band.

From day one, The White Stripes stayed true to their blues-garage roots, as well as their initial philosophies of simplicity and youthful color scheme. They created brand standards and stuck with them to the end. These standards made them recognizable. Even if you aren’t familiar with their music, most people can point out The White Stripes because they own red and white the way Devo owns the Energy Dome.

Their aesthetics stayed consistent, as did their philosophies and self-set boundaries that took them exceptionally far as a musical group. Keep your brand messaging and aesthetics coherent to uphold integrity and familiarity.

Brand success nearly always relies on user experience. And this is why The White Stripes work. They are an experience. They aren’t a band that sounds great on records but puts on a bleak show or vice versa. Every single show is one-of-a-kind, high-energy and honest.

Alongside a charged live environment, the band’s color palette allowed for fans to become apart of the experience. Donning the brand’s colors, the audience is a peppermint swirl of red and white. You aren’t just attending the show, you are a crucial part of the energy and where the evening goes.

Give your consumers an experience they can connect with and be a part of. Share the gift of your brand with them on an intimate level, and you will see response.

At the beginning of their career, The White Stripes only offered merch at shows. Later on, they would consistently have shirts and novelty items at the shows that couldn’t be found online except for on websites like E-bay. The thrill of the hunt was alluring.

The type of products they chose to release also made all the difference. Sure, you could get your band shirt, but they offered novelties, as well. Seriously. These items were a collector’s dream. If you want someone to truly be hooked on your product, play into the hunter-gatherer nature of humans and give them rarities to squirrel away. Producing everything from limited edition vinyl to branded Holga cameras and mini record players, Jack White truly became a William Castle of the music world. 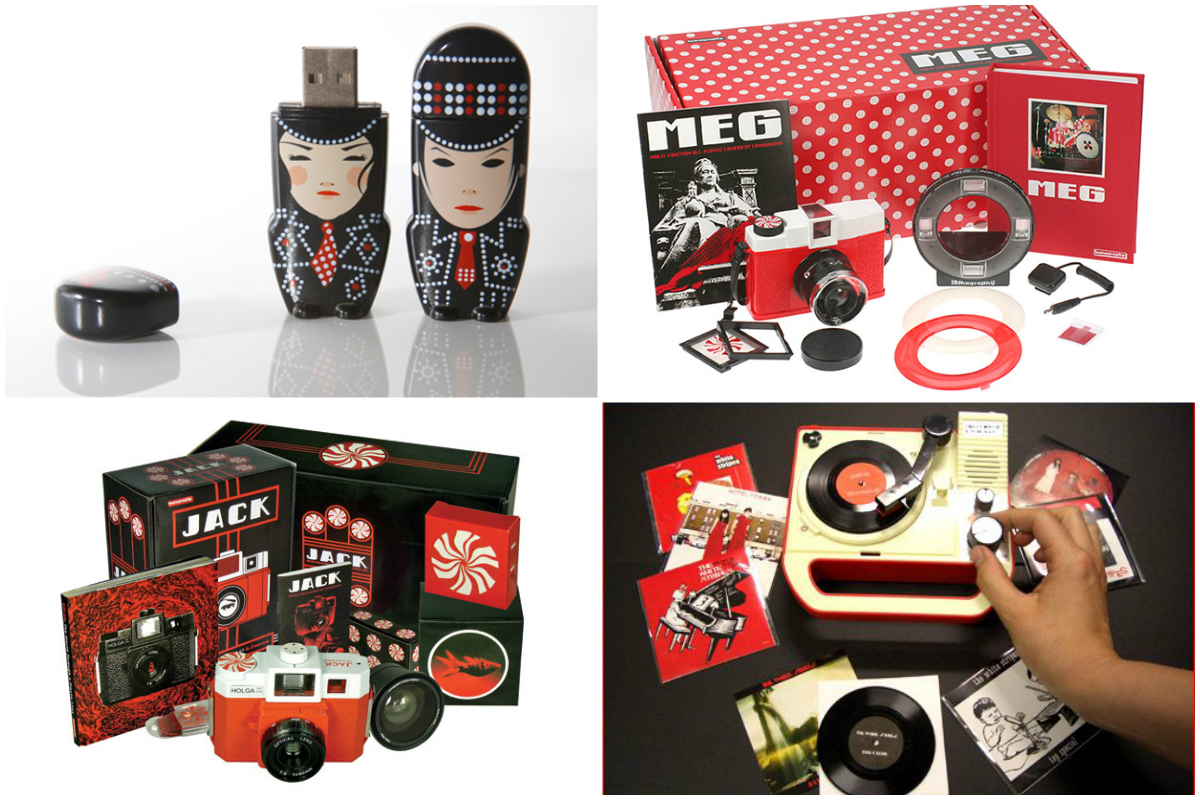 Here’s the real challenge: remaining true to your brand while evolving with your audience. If we look at The White Stripes’ first self-titled album from 1999, it’s gritty and exceptionally erratic. It was recorded in an attic, and it encompasses the raw freedom of youth. Through the years they stayed in touch with the original bluesy allure and philosophy of limitation, but later developed into something more mature and refined. With each album released, you could hear growth but never an off-putting lapse of character.

Take your own brand and apply the spirit of why you originally started. Allow it to grow while staying true to itself.